Skip to Content
Monday, December 5, 2016 — Exactly one year ago Peter Ampe, Executive Creative Director at DDB Brussels, talked about how running can be a catalyst for creativity at the European Festival of Creativity in Anwerp. Today, publisher Borgerhoff & Lamberigts is excited to announce they turned this inspirational talk into a book: The mind works best at running speed. In 80 pages, the book teaches you how to condition your creative mind, while conditioning the body. “There’s a certain way of running if you want to get your creative blood flowing.” – says Ampe. The ECD is one of the most awarded creatives in the country. Being an avid runner himself, he likes to chase his ideas while running through the dunes of his home town Ostend.

Peter Ampe’s book is here to inspire, to motivate, and to encourage. The mind works best at running speed will get you out of your office chair, and thinking on your feet. While running, the mind clears and cleanses itself, and surprises the runner with his own thoughts. That’s exactly what creativity is supposed to be about. “I’ve always loved running,” says Peter Ampe. “And I’ve covered just about every official distance. From the 60m indoor, to the marathon. But these last couple of years I stopped running to break personal records. Instead, running started showing me things that are far more fulfilling.”

Walk at the right speed

Such as generating ideas. "I always wondered if I was the only one experiencing this," Ampe continues. "However, upon inquiry I found some other creative people who experience the same phenomenon There were also as many runners who claimed that running didn’t gave them any ideas. But there is a good reason for this: the ideas will only come if you run at the correct speed. That speed is for everyone different, too, which is clearly explained in the book."

Author Peter Ampe is one of Belgium's most celebrated advertising creatives, previously at Duval Guillaume, now as Exectutive creative director at DDB Brussels and within the DDB group is also a member of the Global Creative Council. He spreads his passion for running with a new kind of book, no unnecessary text, but witty messages and inspirational images, like a Powerpoint or Keynote presentation.

'The Mind works best at Running Speed' is published by  Borgerhoff & Lamberigts  and, will be available from December 7 in all bookstores. 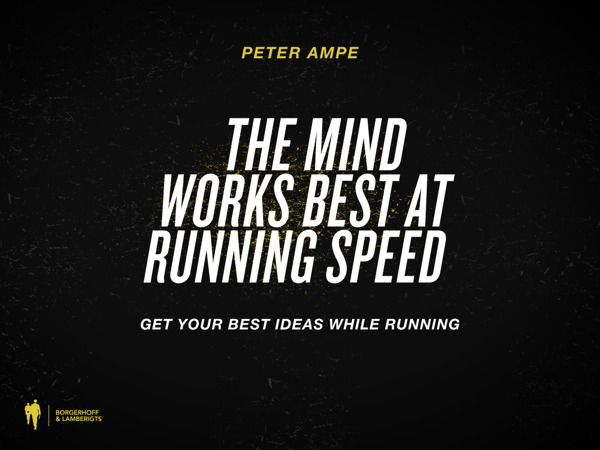