Skip to Content
Thursday, March 31, 2016 — The Alzheimer League provides a world first - books and novels rewritten for people with dementia. The project “Simplified Stories” launches with the biography of Stromae, and is available in bookstores from today. It is a new initiative from the Alzheimer League in Flanders: a simplified series of books designed to motivate people with early-onset dementia to keep on reading.

“Why? Because it helps,” says the director of the League, Hilde Lamers, “Reading trains both the memory and the use of language.”

“People with (early-onset) dementia gradually lose their cognitive abilities,” Hilde Lamers explains. “They not only have memory problems but also suffer from language disorders. It means that they often stop reading books. People with (early-onset) dementia can easily lose the thread of a story, forgetting what they read the day before, or the story behind a particular character. It’s very frustrating, so most people stop reading altogether. Despite the fact that reading is the perfect way to train one’s memory and retain language skills.”

Every 4 seconds, someone somewhere in the world is diagnosed with dementia, and in Belgium, the number is estimated at around 175,000, of which about 3,000 are under the age of 65.

Hence, the Alzheimer League in Flanders, in cooperation with the regional expert dementia centre, Paradox and Professor Sebastian Engelborghs (University of Antwerp), developed this approach to make reading easier and more enjoyable: by simplifying a book, there are fewer elements to remember. The core of the story and the book remain, but in the first book in the series, nearly 8,000 words have been removed from the biography. The layout, font and structure have also been adjusted, and a brief summary of each chapter is also available.

Borgerhoff & Lamberigts publish the first book by Peter Verbruggen, “Maestro Stromae”. Stromae’s popularity also appeals to children/grandchildren who can read the book together with the person who has dementia. The simplified style is characterised as follows: 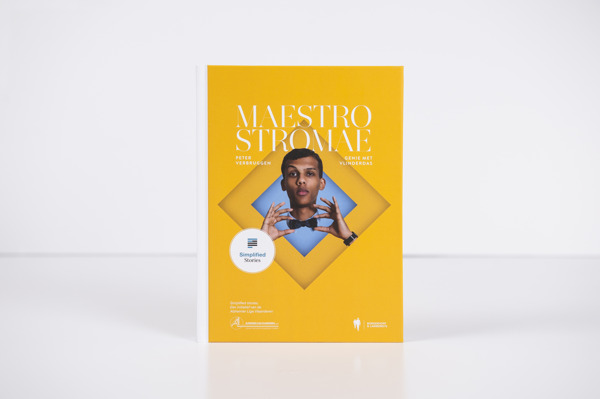