We live in a time where a "check in" via your Smartphone has become a status symbol. And so it’s become normal now to let your friends know what trendy restaurant or luxury resort you are in.

The League of Human Rights has made clever use of this new technology to illustrate that there are many people in the wrong place. In fact, people who deserve to be checked-out instead of checked-in.

At present there are more than 1000 psychiatric offenders unjustly imprisoned. That means they receive no treatment, and so they have no chance to heal and consequently stay in prison. This reduces the chance of being cured because for a proper treatment you need to be in the right place.

An example of the (harsh) reality

Tom De Clippel, son of Patricia De Donder and Ivan De Clippel, already had a drug problem in his teenage years – and so in 1992 he followed a modified drug therapy in a psychiatric hospital. Early March 1999, Tom was arrested for attempted robbery and it was established that he suffers from paranoid schizophrenia. As a result of his mental disorder, Tom was interned. Until January 2001 Tom received treatment in De Sleutel (The Key) until in April he was transferred to Sleidinge. In July 2001, a judicial assistant reported that he had violated the terms of his stay there. The prosecutor then sent Tom directly to the psychiatric ward at the prison of Ghent. July 30, 2001, Tom was transferred to the prison and despite being sent to the psychiatric ward was put in a cell with three other inmates. He didn’t understand why he ended up in jail again and struggled against it, getting into a conflict with the guards and being segregated into a punishment cell. On August 2 the psychiatrist decided to change his medication and moved him into an individual cell. Sadly Tom committed suicide on August 6 of that year. In a landmark ruling on 6 December 2011, the European Court of Human Rights condemned the Belgian State to pay damages of 50,000 Euro to Tom’s parents.

How does the petition on Foursquare work?

Banners for the campaign are displayed in the 9 largest railway stations in Flanders (Bruges - Ostend - Mechelen - Kortrijk - Brussels Central - Hasselt - Leuven - Gent Sint-Pieters - Antwerp Central). These banners indicate that you can sign the petition from your smartphone by checking in to Foursquare at this place. By checking in you automatically sign the petition: the idea being that a check-in from you would be the check-out of a psychiatric offender. You can also check in at the main prison of Flanders, a place of course where you wouldn’t want to check in to.

Purpose of the Action

With this Foursquare initiative, the League wants to rescue detainees from being forgotten and help each one transfer to a residential environment where they can receive the appropriate care. The League for Human Rights is convinced that society in general would greatly benefit by getting inmates treated so they can be safely and properly reintegrated into society.

The locations for signing the petition via Foursquare can be found here: https://foursquare.com/user/17879091/list/check-in-to-check-out-places 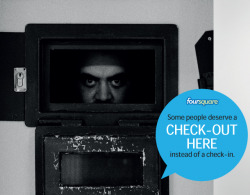