Skip to Content
Thursday, November 9, 2017 — For the launch of the new Volkswagen Polo, DDB Brussels imagined an original and surprising stunt. To highlight the efficiency of its pedestrian recognition system, a standard feature on the new model, the Polo was equipped with a camera that was directly connected to this active security technology. As a result, each time the Polo automatically braked for a pedestrian, the camera took a picture of him crossing the road. The actual pictures taken are currently being used in posters on our streets.

In September, Volkswagen launched the new Polo. The compact member of the Volkswagen family now comes equipped with Front Assist pedestrian recognition as standard equipment. To highlight this technology, DDB Brussels imagined an original stunt. For the first time, the pictures for the new outdoor campaign were not shot by a photographer, but by the car itself.

The cross-media production company Fish Eye did the required engineering for this ingenious concept. A smart webcam detected the visual signals on the car’s dashboard, when the security system was activated, immediately setting off a camera that was fixed to the car’s bonnet. After a test phase, the Polo started collecting pictures from the pedestrians. Three pictures were selected by the young and promising photographer Frederik Buyckx, who supervised the project, and then used for the new Polo’s outdoor campaign. 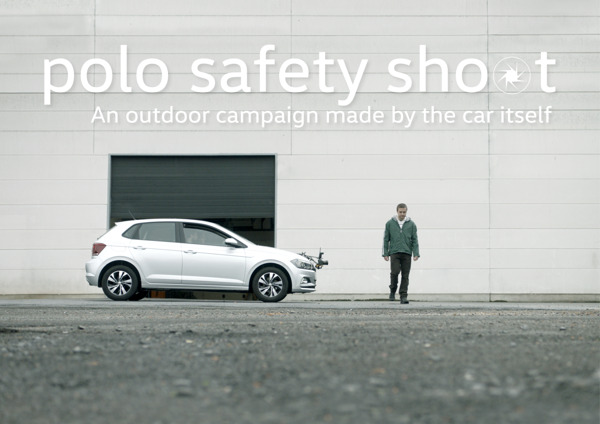